This printer is a beast indeed. It features a build-volume of 30x30x40cm, looks cool, feels sturdy, and produces really good prints! 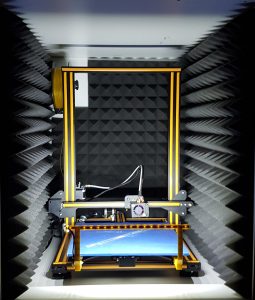 However, it is pretty loud out of the box, which drastically reduces the WAF (wife acceptance factor). Below I will describe the modifications I did to make it silent and suitable for the living room.

In the following paragraphs I will describe all modifications I did to get it silent and reliable enough to run inside my living-room.

This mod is simple and awesome! It will reduce the noise made by X- and Y-movements of the axes drastically. Just screw a damper between the motor and the frame, re-adjust the pully, and you are good! According to my imprecise measurements, this brought the noise down from roughly 45dB to 15dB, it became a barely noticeable. I baught mine on amazon from a seller called Walfront, 5 pieces for 12 EUR.

At first I did the Silend-Fan-mod (below this section, just for reference), which was still far too loud, so I followed Kashinoda’s suggestion (https://www.thingiverse.com/thing:2568828) and removed all three fans inside the control-box and attached one single 120mm fan below the box, using his bottom plate. I designed my own feet for this (https://www.thingiverse.com/thing:2834331), as the other ones on thingyverse were either too large in width, or just took too much printing time.

I plan on having this printer in my living-room, so in addition to the other mods, I also encased it in a wooden cabinet I „designed“ and built myself. At first I lined it with (what I thought) sound dampening studio panels (see pictures below), but that did not really get it as silent as I wanted. Following a suggestion from user agodak on thingiverse, I got some rockwool panels (ISOVER Akustic TP 1, 4cm thick), wrapped them in some cheap cloth and spray-glued them to the walls of the cabinet, that really made it silent (and looks ugly as hell, sadly). I extended the cable of the heatbed and placed the controlbox outside on the back of the case. The first image in the gallery gives the measures I used in this design in case you would like to replicate it!

I attached the control-box to the back of this wooden cabinet, as it suited the placement in my flat. I had to mount it vertically and extend the cables for the heated bed. If you plan to put the control box outside on a shelf or similar, I suggest getting one of the extended cable kits from ebay (I have seen them for around 15 EUR).

Hard acceleration and jerk values caused a lot of noise on small infills and corners, which would sound like hitting the floor. Unfortunately, the acceleration and jerk-values cannot be set directly on the printer and saved, and there are no fields in RepetierHosts cura configuration. So, I decided to include the setting of these values in my printers start-GCODE:

As the printer sits in a dark enclosure, I needed some lightsource to illuminate my prints in progress. I wanted to avoid the extruder nozzle being in the shadow for the first few layers (in order to visually verify that those layers are layed down well enough for the rest of the print to continue flawless). The printable holder can be found here: https://www.thingiverse.com/thing:2840041 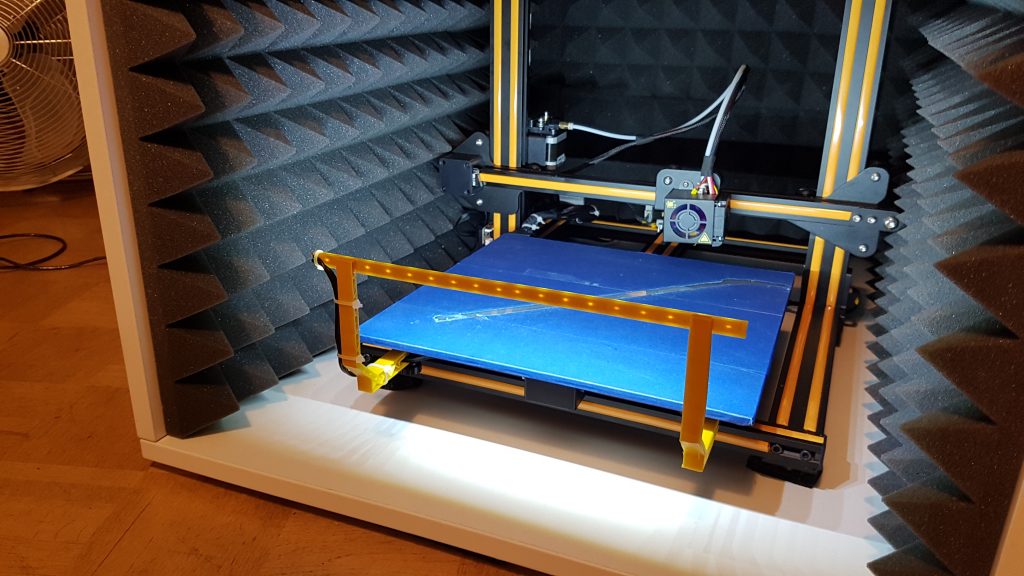 At first I replaced all three fans inside the controlbox, as well as the extruder-fan, which reduced the noise from 50dB to 40dB, but it still felt pretty loud, so I just used one single 120mm fan mounted to the bottom instead (see above). The fans I used for this mod were the following: